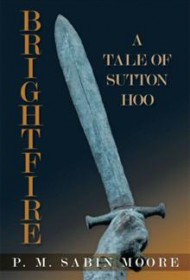 In the historical novel Brightfire (sequel to author P.M. Sabin Moore’s Storm Frost), Christianity is gaining a toehold in Sutton Hoo, on the eastern side of Britain, yet a belief in one God is resisted by many.

It is 608 A.D., and previously banished Niartha and her son, Ricberht, have gained favor in King Raedwald’s court. Ricberht has become a gifted goldsmith who creates a spectacular sword for the king, and Niartha is a highly respected healer. But Raedwald’s angry and disruptive son, Eorpwald, is bent on destroying them both and causing mayhem. It is a time rife with bloody clashes, rapes and cruel murders, with a general distrust of religious salvation as a replacement for healing herbs and powerful, protective gods.

As with the first book, Moore blends real historical figures with colorful fictional characters while incorporating the rituals and lifestyles of the time. Visually rich physical descriptions are drawn from archeological evidence, such as details of Raedwald’s underground burial in his ship, the Seawitch: “he wore the emblems of the power he held as High King: the shoulder-clasps, the great gold buckle, the purse and, of course, he wore his sword-belt. . .”

The mostly strong writing becomes emotionally flat when describing even the bloodiest battles, however. Example: “Many injured Northumbrians leapt into the stream and bled to death or drowned. Those few who tried to flee . . . were cut down without mercy, so that, beheaded, they could not hope to reach the Hall of Heroes, Valhalla.”

Nevertheless, Moore’s deep love of history shines through in this enlightening book, which dispenses a thorough knowledge of the era, its culture, and a turbulent time period when happy endings were few and the fates could be cruel, even for the most beloved.