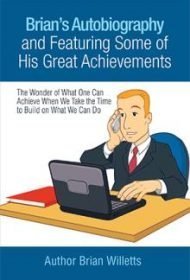 In Brian’s Autobiography, 71-year-old Brian Willetts recounts a life lived through hard work and earnest intention, most of it unknowingly yet inextricably shaped by dyslexia.

The book is comprised of articles (or chapters) written by the author over the last decade. The first half features a brief account of his parents’ lives in New Zealand, where he grew up, followed by a largely chronological (and unnecessarily detailed) recollection of his own experiences, including twice working his way around the world (he was a waiter in London, a cowboy in Texas, a cook in the Australian outback and more), before settling down in Australia.

The book’s latter half offers greater value, particularly the chapter titled “Brian’s View of Dyslexia through Many Years of Study.” Diagnosed at age 60, the author approaches the topic with admirable candor and spirit. He details his understanding of the cause of dyslexia and his struggles with 1950s schooling methods. He recalls teachers accusing him of being lazy and disruptive and explains his efforts toward improving his written communication since his diagnosis.

He admits, though, that writing remains a challenge. “The focus on how well I write something is always going to revert back to the many minor errors that I have made,” he notes, “such as being bad at spelling, missing a word, or adding an unnecessary word, along with other minor errors…” Indeed, the quality of the text is problematic. Much of it is rambling and error-prone (e.g. mixing past and present tense). Many sentences are overlong, and content is repeated across chapters (often verbatim), in consecutive paragraphs, within paragraphs and sentences. Such issues greatly impede the reading experience.

Willetts notes that “There is an intelligent person buried in that writing.” Readers won’t doubt that fact. The resilience demonstrated by the author is compelling and heartening. But the prose requires a keen editor to bring out its full potential and to make the reward of reading worthy of the effort.