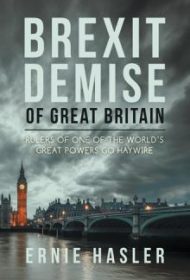 Ernie Hasler’s new thriller follows a man’s journey into the British underworld and beyond, through a host of increasingly bizarre plot twists.

As the novel begins, a woman activist named Kelly is attempting to sabotage a nuclear submarine in Scotland. Hasler then flashes back to her courtship and marriage to boyfriend Douglas, which includes his receiving a list of 300 people who secretly rule the world.

When Kelly disappears after a second nuclear sabotage mission, the government frames Douglas for her murder to discredit him if he chooses to reveal the list. He goes on the run, aided by an underground network of newspaper vendors, but runs afoul of a criminal syndicate. He then takes shelter with a community of gypsies, who have been protecting Kelly.

Douglas and Kelly adopt the gypsies’ Messianic Jewish faith, and eventually Douglas becomes their leader. His weekly Sabbath sermons reflect his increasing despair at life in Britain, particularly regarding the Brexit vote, which, despite its prominence in the title, doesn’t occur until nearly book’s end. After the government claims some gypsies are in the country illegally, he requests that the group be deported to a Jordanian refugee camp, where he continues to preach as more drama unfolds.

Douglas careens from mishap to mishap, leaving subplots largely disconnected and unresolved. The list of 300 people, for instance, has no later payoff. Toward the end, the novel increasingly degenerates into a series of Douglas’ sermons on issues such as the coming apocalypse, the Rohingya refugee crisis in Burma, and Donald Trump.

A methodical narrative style also compromises the story. Hasler frequently mentions his characters showering, getting dressed and packing bags in much greater detail than necessary, creating a slow read.

Hasler’s ideas might be intriguing if effectively explored. As is, however, the novel’s shortcomings leave it unlikely to find an audience.