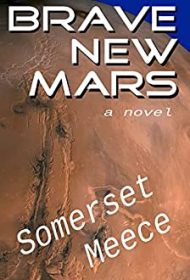 Allen “Somerset” Meece’s Brave New Mars is a powerful science fiction novel with dystopian elements. Set in the 2084 Martian frontier culture, it’s about rebelling against the oppressive “corpocracy” that governs the planet Mars.

In 2084, a single corporation has purchased Mars. This corporation agrees to manage the financial and legal elements of the government. A multibillionaire “Money Monster,” the corporation controls the world by utilizing the Mercantile Mind AI main frame supercomputer software, which has no respect for human rights and only considers how to maximize profits.

The plot unravels when a visiting miner named Perry Walker from Ganymede comes to Mars searching for markets for minerals found in space and for a romantic partner. As he explores, he recognizes the oppression forced on Martians and challenges the inhuman Martian societal order after he finds his new partner, Carry. Together, they organize a force and launch a revolt against the devious government.

The novel—a high-tech, futuristic, rocket-head space drama coated with a thoughtful grasp of the human psyche—examines the obsessive pursuit of wealth and power and how it limits the freedom of its victims. The story is well-paced and easy to follow. The chemistry between Perry and Carry is exciting and well-written, and their conversation on their second meeting offers insight into the story’s world-building as they discuss the beginning of human civilization on Mars and how it turned chaotic.

The monologues of untrustworthy machines and AI are masterfully constructed and unsettling, and two poems read at the start and finish of the story complement the narrative.

Although there are a few spelling errors, they are easy to overlook. The author also offers a glossary at book’s end, which explains scientific terms used throughout.

Overall, Brave New Mars offers a gripping plot that will engage science-fiction readers and also appeal to individuals curious about what it could be like to live in space in a near-term dystopian future.