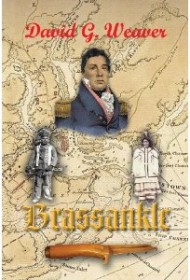 Brassankle, by David G. Weaver, is an historical novel set during the time of the American Revolution. The main character, Truly Doran, is half Caucasian and half Catawba Indian. According to the author, the term, “brassankle,” was used during colonial times to “refer to any light-skinned, multiracial person.” Hence the title of the novel refers to the protagonist, who spends much of his time trying to win acceptance from the colonists.

Truly spends his childhood acquiring tracking and hunting skills from his mother’s tribe. When he comes of age, his trapper father takes him to Charles Town to learn the ways of the colonists. There he pursues his schooling and eventually travels to the Coosawhatchie River to build a plantation. When the revolutionary war breaks out, Truly becomes a scout for the Whigs and serves under such luminaries as Francis Marion and William Washington. Between battles, the protagonist has time to form steamy liaisons with several women and to court the woman who will eventually become his wife.

The author of Brassankle has a workmanlike style and maintains a steady pace throughout the novel. While his descriptions are not always as rich as they could be, there is enough realization throughout the story to keep readers interested.

One drawback to the narrative is the author’s failure to fully develop his female characters; they serve as little more than objects for the protagonist’s sexual interest. Another problem is the author’s jarring use of modern terms, which conflict with the novel’s historical ambiance. At one point, for instance, Truly’s father states that he must learn the tools to compete in the “life style” of the colonists.

These flaws, however, are not so severe as to eradicate the overall success of the novel, and fans of historical adventure novels, such as White Indian, may well find Brassankle an enjoyable read.