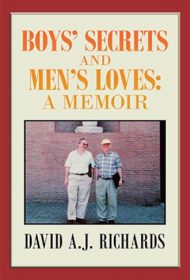 Mining his experience as a gay, Italian-American man raised in post-WWII America, David A.J. Richards uses art to explore how patriarchy damages boys as they develop into men.

Richards is a New York University professor of constitutional and criminal law. His meticulously researched book, with its wealth of secondary sources, weaves his life story with the works of major literary and cinematic artists (both gay and straight) who influenced him as a young man, helping him accept himself as he shielded the world from his “secret self”—his homosexuality. Throughout, the author illuminates the damaging effects of a patriarchal system.

Richards’ analysis begins with 19th century authors such as Hawthorne and Melville and extends into the 21st century with the cinematic works of John Ford and Clint Eastwood. For example, he posits that Hester Prynne in Hawthorne’s The Scarlet Letter represents a voice of resistance to Puritan patriarchy, while Captain Ahab in Melville’s Moby-Dick reveals the destruction patriarchy can wreak on a man’s psyche. He examines Eastwood’s evolution from characters such as Dirty Harry, who enacts “patriarchal manhood,” to a “gender-bending young woman” boxer and her “conventionally-sexist trainer” in Million Dollar Baby.

His work is full of remarkable insight. For instance, Richards offers a progressive critique of the rise of Donald Trump, presenting former President Obama as a feminist counter-example and arguing that both men and women must join the feminist cause to resist patriarchy and achieve “democratic manhood.” Joining the feminist movement, he posits, represents not merely individual expression of one’s belief in equal rights, but a commitment to an ideal form of government, one devoid of imperialist tendencies. Renouncing the patriarchy, he believes, would prevent wars like those in Vietnam and Iraq.

Richards’ memoir is a valuable text illuminating the negative impact American patriarchy has had, not only on the development of individuals but on the constitutional framework of society. Readers with an intellectual bent will find the author’s analysis fascinating.

BlueInk Heads-Up: The Star designation is offered with the acknowledgement that significant copy-editing errors, including some passages repeated verbatim, remain in need of attention.