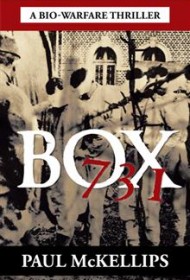 A modern-day anthrax attack rooted in the horrors of World War II-era germ warfare and human experimentation is at the heart of Box 731, a thriller featuring the protagonists from Paul McKellips’ previous two novels, Uncaged and Jericho 3.

Box 731 opens with U.S. Navy Capt. Seabury “Camp” Campbell surviving a near-death experience, having been shot accidentally by his beloved, Lt. Col. Leslie Raines, as they stopped a suicide bomber from setting off an explosive vest. Camp doesn’t waste much time recuperating, however, as he’s soon jetting off to Israel to reunite with Raines and then to Syria for a rescue mission.

Camp isn’t just bigger than life; he’s bigger than several lives. Our hero is a Navy SEAL turned trauma surgeon, which comes in handy when he takes down a terrorist by leaping six feet through the air to stab the enemy – and immediately thereafter saves several injured people in surgery. This all occurs just a couple of months after Camp’s heart stopped on the operating table following the accidental shooting, edging past creative license and into the comic-book realm.

The action scenes in Box 731 are well constructed, and McKellips keeps the narrative moving quickly, though a tangential storyline about wedding plans would have been better off excised. The dialogue also is uneven, with some lines better suited to a romance novel: “You’re my soul mate, Leslie Raines, you – and only you – you are the only reason I came back. And I won’t leave this world again unless you’re in my arms.”

Those issues and some overly broad characters keep Box 731 from really hitting its stride, but overall, it’s a serviceable thriller with some energetic scenes and suspenseful moments that many readers will enjoy.