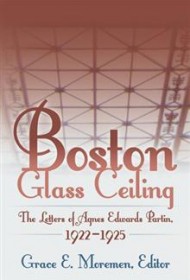 There is much to admire about Boston Glass Ceiling, an utterly compelling compilation of letters written by Agnes Edwards Partin from 1922 through 1925. The letters, edited by Partin’s daughter, Grace Moremen, span the time when Partin worked as a secretary-cum-reader-cum-editor for the Atlantic Monthly Press. They also cover Partin’s subsequent travels in Europe where she interviewed several literary luminaries, including A. A. Milne.

Most of the letters are written to Partin’s mother and are rendered in the brisk style of a news reporter. Partin’s topics range from descriptions of ballet and theater productions, to daily life in a publishing house, to anecdotes concerning famous people, met and cultivated. Partin also depicts the bustling, upbeat flavor of a 1920s Boston and packs her letters with the fine detail much savored by history buffs and historians. For instance, she describes the change-over from gas light to electric in one letter and mentions going to a secret gathering for Margaret Sanger in another.

Apropos of the book’s title, Partin often delves into her struggles to advance in what was essentially a man’s world, but the letters in this collection represent so much more than one plucky woman’s struggle against gender bias. In their detail and comprehensive scope, they evoke the ambiance of a bygone world. They encourage readers, as Partin states in one her letters, to walk “with ghosts for a while.”

With Boston Glass Ceiling, Moremen provides a carefully edited key to the past. She annotates where annotations are helpful and thoughtfully supplies a very useful index and list of personae. The reader’s only quibble might be with Moremen’s decision to cut and summarize some of the letters. For even though the book is more than 600 pages long, readers may well resent anything that deprives them of a few more pages of Partin’s entertaining companionship.