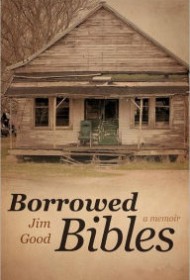 Author Jim Good’s early years can almost be seen as a metaphor for his journey through life. The son of a restless preacher, Good had 31 addresses by the time he was 20 and attended 13 schools by the time he finished 12th grade. That nomadic existence exposed Good to all manner of lifestyles and beliefs, feeding his curiosity and confusion; later, that searching was mirrored in his quest for answers about God and life.

Religion permeates Borrowed Bibles, but not distractingly so. (The title comes from his father’s penchant for “borrowing” Bibles and hymnals from churches so he could conduct his own services on the family porch or in the back yard.) Good’s father, James Sr., was a strict interpreter of the Bible, or misinterpreter, depending on one’s views. He disagreed with most religions and had his own beliefs that he preached to his wife and five children.

“Dad didn’t like Catholics,” Good writes, “because they were led by the Pope who lived overseas and wanted to rule the world and besides they had preachers that wore strange clothes and they did strange things on Christmas Eve.”

Other religions were similarly dismissed. His father ruled the family with his uncompromising positions, on religion and other aspects of life. Good, though, saw contradictions and questioned them, leading to a lifelong quest to find his place in the world.

The majority of Borrowed Bibles deals with Good’s difficult childhood, starting on a barely working farm in Arkansas. After a detailed narrative that takes readers through his early years, he jumps 22 years, to 1970 when he was 34. Normally, such a gap would be detrimental to a memoir. But the author fills readers in on what was skipped, and it works.

Good is a talented writer, and his story of his search — one that ends with him living in California, an adherent of the Unitarian Church — makes for interesting reading overall.