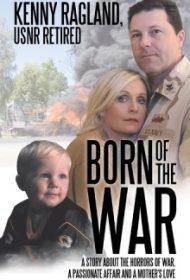 A story of friendship, love, loss, and healing, Born of the War follows a complicated path, negotiating the strong emotions that accompany the tragedies of war and marital infidelity.

Kelly Raines and Leigh Andrews are both Navy Reservists, deployed to Iraq in 2006. They work as journalists, covering military operations in the region, which puts them in the line of fire as they travel frequently on military convoys. Both married to others, the two are close friends and eventually have a brief affair ignited by the stresses of deployment.

The book’s first half primarily focuses on Kelly and his and Leigh’s deployment. Action-packed scenes illustrate the horrors of war, punctuating the slower sections that detail their lives in Iraq. Both realities are obviously painstakingly researched and authentically rendered. Without unnecessary exposition, the author vividly portrays their situation, often using military jargon that is clearly explained for lay readers. Unfortunately, the fast pace and intense action come at the cost of fuller character development, which could have enhanced the book’s depth and overall richness.

As the story evolves, Kelly is killed in an IED attack in a breathtakingly sudden moment, and shortly after, Leigh discovers that their brief affair resulted in a pregnancy. She’s sent back to the States almost immediately, and the story shifts its primary focus to Leigh and her life after Iraq as she struggles to save her marriage and deal with Kelly’s widow and other family members. This change could have felt incongruous, but the author manages a smooth transition. The tone is no longer that of an adrenaline-fueled military tale, but a family saga of pain, forgiveness, and the fallout from a tragic death and extramarital affair.

While Born of the War has a romantic overtone, especially in the first half, it isn’t really a book for romance readers. Rather, it’s a multilayered story that will appeal to readers who enjoy military and family-focused literary fiction.