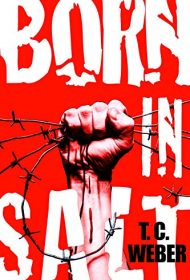 T.C. Weber’s Born in Salt chronicles the aftermath of an alternate history in which Charles Lindbergh fomented a coup against FDR, sided with the Nazis, shredded the U.S. Constitution, and ushered in an oppressive oligarchy. Set in 1983, eugenics are now the law of the land, corruption is rampant, and poverty is ubiquitous.

While the set-up is much like Philip Roth’s Plot Against America, this story takes up where Roth’s book left off, showing the long-term effect of Lindbergh’s ascent. In rural New Bethany, Illinois, Ben Adamson—young, white, and poor—is trying to help his dad hold onto the family farm. When Ben’s brother, Jake, is killed suspiciously while serving in the Army after trying to expose American imperialism in Cuba, Jake’s fiancée Rachel is haunted by the death. Ben, also devastated and rapidly falling for Rachel, joins in her obsession.

Feeling betrayed by the government, they’re easy recruits for Paul, his best friend Sarah’s mysterious revolutionary cousin. Unfortunately, before the resistance can begin, Rachel and Ben are arrested. Now Ben has one shot to escape his sadistic incarceration and earn Rachel’s freedom in the bargain: He must go undercover to betray the very revolutionaries he sought to join. But can Ben save Rachel without condemning Sarah and putting his father at risk?

Both cerebral dystopia and cat-and-mouse thriller, Born in Salt succeeds on every level. The political commentary is incisive but never bludgeoning, helped considerably by a relatable protagonist. Constantly faced with lesser-of-two-evils choices, Ben tries hard to do the right thing, nonetheless. Throughout, Weber expertly adds layers of suspicion and paranoia, complicating relationships and ratcheting up the tension.

Born in Salt is an indictment of far-right autocratic impulses, and like the best dystopias, it feels utterly relevant. But it’s appeal transcends any ideology, with a desperate story of love and conflicting loyalties that builds breathlessly to a satisfying reckoning certain to keep readers hooked to the final page.