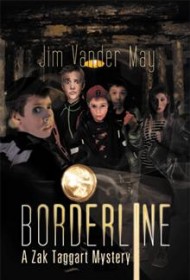 Jim Vander May’s Borderline: A Zak Taggart Mystery has everything going for it: a suspenseful storyline, a setting that works on several levels, a mystery to solve, a deftly handled underlying theme, a practical message, and a grasp of the workings of a teen’s mind as shown through its likable protagonist, Zak Taggart.

The action begins as 13-year-old Zak and his family move from Savannah, Georgia, to Zak’s grandfather’s farm in rural Washington State. On the borderline between the U.S. and Canada, it’s a place where drug trafficking is rampant. This is also an emotional borderland and minefield for Zak, who must enter adolescence in a new world where his southern accent draws a bully’s aggression. Zak must make new friends and also prove himself to his preoccupied parents, who see him as a liar after a minor incident that occurred down south. Fun but messy incidents with his new friend Alex and Zak’s actions against the bully provide no relief in re-establishing his parents’ confidence, but his wise and trusting grandfather helps Zak along.

Zak and his friends team up as a group they call “The Witnesses.” They make certain Zak is not alone in encounters with the bully and carefully record the bully’s actions. At the same time, the group investigates what is happening in an abandoned house and barn where lights are seen at night and a truck belonging to Zak’s uncle – who has a history of drug abuse – is sometimes viewed. The action really ramps up when Zak’s grandfather is attacked, and when Zak and his friends cross the border to help a Canadian boy in trouble.

This is a young adult novel, but parents and teachers of teens would be well advised to read it, too, since it delivers excellent insight into a youth’s mindset, a useful solution for dealing with bullies, and simply an utterly engaging read. Vander May is an author to watch.