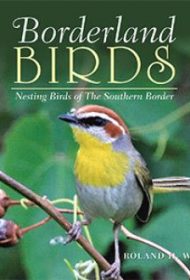 In Borderland Birds, passionate birder, biologist, and retired National Park Service ranger Roland H. Wauer blends bird inventories of the U.S. border with Mexico with his personal observations of birds in this range for over four decades.

Following a brief introduction, the author offers 90 color photos and nearly 50 entries on individual nesting birds, both permanent residents and migrants who cross the Mexican border into southern Arizona, New Mexico, and Texas. The entries include detailed information on each bird’s native habitat, songs, mating behaviors, the observed effects of climate change, and more. These informative details are woven into a narrative structure, often including the author’s personal birding experiences and copious quotes from others’ works, as well as from Wauer’s earlier publications.

Wauer’s passion for the subject is clear, and the variety of birds unique to this range is spectacular, from masked ducks to varieties of hawks, owls, hummingbirds, and more. At times, Wauer offers new angles and insights, spurring readers to think in new ways about birds. At one point, he writes: “…we identified it as a whiskered screech-owl primarily due to its Morse-code-like song.”

Unfortunately, Wauer’s use of so many quotes from other works interrupts his writing and makes reading cumbersome and distracting. Paraphrasing the information more succinctly would have been better, as Wauer’s own voice is a delight.

The book could also have used a more detailed introduction. While the existing introduction inventories the unique birds in the borderland, it neglects to discuss the unique diversity of the borderland terrain, from desert to tropical, interior to coastal. It also fails to note that his focus is a mix of avian inventory and travel narrative, an approach as original as the little-known birder’s territory he covers. Additionally, a map would have helped orient readers.

Despite such issues, the book delivers a solid feel for the unique bird residents and territory of this southern borderland. Birders of all stripes should find it informative.