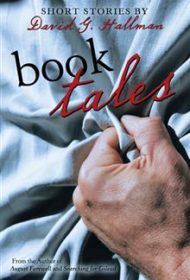 This creative, compelling collection of short stories is linked by an unusual common theme: Each story is inspired by a book or writer, from Paul Bowles and his novel The Sheltering Sky, to E.M. Forster and Maurice, and even Francis Poulenc and his opera Dialogue des Carmelites. Gay themes permeate Book Tales, as many authors referenced are gay as are nearly all of the main characters.

Several stories are about young men discovering their sexuality and learning about relationships. The books they read help in their journey. In “About Time,” for example, as Grant reads the novel The Front Runner, one of the first bestselling novels featuring a gay couple, he begins to understand why “athletes had been an obsession” for him from a young age.

In “La Biblioteque Sainte-Genevieve,” Peter is so enthralled by Abelard and Heloise’s story that he travels to Paris to read their letters in the original French, identifying with them because “so much resonated with his interests, his despairs, and his aspiration for a love as intense as theirs.”

“Morgan and Maurice” blends fiction with an essay about E.M. Forster. The first part covers his life, describing his shyness and how “a pinch on the bum” inspired his gay novel Maurice, as well as the impact of Oscar Wilde’s trial on Forster’s decision to not publish it during his lifetime. The Epilogue is an imaginary conversation between Forster, known to his friends as Morgan, and Maurice, the title character. Their discussion ranges from playful to argumentative, as when Forster explains why he didn’t publish Maurice. It’s a clever, imaginative look at the relationship between author and character.

The stories have an easy style and passion for literature that comes through on every page. The characters are likeable and engaging, and the authors and titles referenced are different enough to appeal to a wide audience. Readers looking for thoughtful stories exploring the impact and importance of books will certainly enjoy Book Tales.