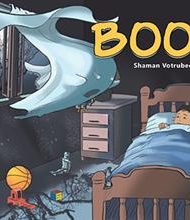 Writing a scary book for children is tricky: how frightening is too frightening? That’s the question posed with Shaman Votrubec’s genuinely scary picture book titled Boo.

Boo takes place entirely in a young boy’s bedroom. As he settles into bed, the mood is set quickly: “Pull the blanket up high to cover your eyes,/ Your heart pounds inside as the last daylight dies.”

The boy’s fears escalate as he imagines fingers emerging from under his bed (shadows from the trees?) and an owl that seems to have become a witch outside. Windows fly open—from wind or something else?—and the boy imagines his toys coming to get him.

The illustrations do an excellent job of conveying the frights without going overboard; an image of toys walking around is creepy, but not disturbing, and the same is true of the image of the witch.

There are minor issues with the text, such as inconsistent verb tense (“But you peek out from your covers when the whole floor shook [sic]”) or spelling (“breath” instead of “breathe”).

The book’s main problem for parents of younger children, however, is that when the boy has finally had enough and screams, his mother comes and says, “Nothing will scare you while I am here, I’ll sleep with you tonight.”  There are no comforting words such as “it was just your imagination,” and, thus, the book subtly suggests that having a parent around is necessary to be safe.

A scary picture book that kids can relate to is a rare commodity. With Boo, Votrubec has succeeded in creating a story that will frighten children with scenarios most have encountered in their own rooms. Parents should judge their own child’s tolerance for such things before giving them the book.

Still, many youngsters will smile after the back cover is closed, giddy with adrenaline and relieved that it was just a story.