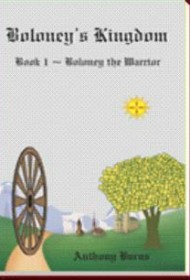 In Anthony Burns’ young adult novel, Tony Boloney is a sweet-natured, bullied schoolboy who has just begun to question his place in the universe. He’d much prefer to stay home, read about astronomy and play with his cat than face the daily grind among his classmates. Then one night, a spirit named Zefnia appears and draws Tony through a portal into an alternate reality, the Land of Mazgavon. He’s sent on a journey to unseat the ruler, Morchy, and has adventures along the way.

Burns is a retired teacher with an interest in astronomy, and he is a skilled writer. Several passages in the book shine, as when a spirit tells Tony, “Remember that, ultimately, your home is yourself. It is where you reside, even when you do not know it. It has countless hidden rooms and passageways.” There’s much to like here.

There are a few problems as well. Many ideas are suggested but not explored in detail. Set pieces about the inefficiency of bureaucracy are likely to go over the heads of younger readers while leaving older readers to wonder why these ideas were included but not expanded upon. Ditto the mention that the kingdom had been taken over by the “Greedopolis Corporation,” with no further discussion of what this corporation is or what its greed has netted the company. All these loose ends may be addressed in future volumes, but a rewrite explaining them here would make for a more auspicious beginning. As it is, Boloney’s Kingdom will appeal to young fans of fantasy, but they will need to keep an adult handy in order to answer the many questions that may arise.