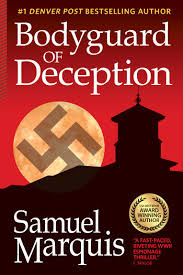 Samuel Marquis launches a new series about World War II that offers a very different perspective from most adventure novels that involve Nazis: This time, the good guys are German.

Marquis opens on German U-boat 521 in the North Sea off the coast of Scotland. Its mission is to pick up fugitive German spy Erik von Walburg, who is carrying information that could be crucial to the war’s outcome and must deliver it safely into the hands of the German war machine. It turns out the U-boat is commanded by Erik’s brother, Wolfgang, and is also carrying sadistic SS Major Prochnow, who tries, unsuccessfully, to discover Erik’s secret mission.

As the story unfolds, the brothers are captured by the Americans and sent to a POW camp in rural Colorado. The German prisoners are commanded by the sadistic Colonel Franz Kepler, and all come under the authority of the upstanding but frustrated warden of Camp Pershing, Jack Morrison. Things are complicated enough, but the author introduces yet another wrinkle in tough local rancher Katherine Templeton, whose origins and sympathies are critical to the Wolfgang brothers’ fate.

The book features a few contrivances that are a stretch, and sometimes the many complications feel convoluted and overwhelming. But the story has numerous strengths. Marquis cleverly borrows real-life inspirations from British journalist Ben McIntyre’s excellent books about wartime spy craft and throws in many true historical figures, including J. Edgar Hoover. In addition, the author clearly sympathizes with all of the characters, which humanizes everyone while simultaneously deepening the drama and inherent tension.

Ultimately, there’s something for everyone. Old-time spy buffs will appreciate the tradecraft and attention to detail, while adventure enthusiasts will enjoy the unique perspective and setting for a WWII story. As Marquis throws in everything but the kitchen sink, he turns this well-told, if byzantine adventure novel into a combination of The Great Escape, Public Enemies, a genuine old-time Western, and a John Le Carré novel.