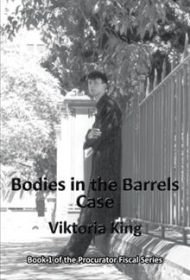 In Scotland, “procurator fiscal” is the proper name for what many know as a coroner. Bodies in the Barrels Case is the first in a series of thrillers centered on lives that meet unfortunate ends. It’s scary, sexy and rich with character details, but also presents some organizational obstacles.

Lieb Canavan is the titular procurator. While his wife’s away visiting family, he’s called to a gruesome find. The decomposed body stored in a blue barrel would be horrific enough on its own, but it’s not the first of its type that Canavan has seen. Is the original killer still hard at work, or is there a copycat on the loose?  Progress on the case and careful examination of the evidence play against Canavan’s relationship with his wife and a subplot about the attraction that builds between an inspector and his female partner.

Author Viktoria King knows her way around the thriller genre. Morgue scenes and those of a woman’s rape and torture are upsetting and scary, and there’s a steamy sex scene that, while seemingly unnecessary, is well done.

A few spelling and grammatical errors don’t detract from the story, but its odd structure and some plot choices can be offputting. Rather than open with a scene set on the job, for example, there’s a flashback within a flashback about a childhood illness that compromises Canavan’s ability to have children; it seems like it’s leading somewhere but never does. In addition, because the detective work on the case is so meticulous, it’s disappointing when the answer to “whodunit?” is revealed in a journal wherein the killer detailed every single thing he did. Finally, at 87 pages, the story feels rushed; it could easily be four times as long and more enjoyable for it.

Bodies in the Barrels Case isn’t perfect, but with editing and expansion, King’s writing could stand alongside that of P.D. James or Elizabeth George. She’s got the chops, but this volume needs reorganization and pacing to realize its potential.