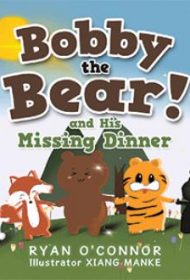 A bear sets an example of sharing and forgiveness in Ryan O’ Connor’s children’s picture book Bobby the Bear! and His Missing Dinner.

Bobby the Bear wakes from a nap and sets off to catch a fish for dinner. Along the way, he sees several friends, and invites them to join him. But after he catches and cooks a fish, Bobby’s dinner suddenly goes missing. Other friends help Bobby search for the missing fish, and eventually they find Peter the Panther about to eat it.

Confronted, Peter confesses that after trying and failing to catch his own fish, he resorted to theft. Bobby responds with forgiveness and tells Peter that if he’d only asked, “I would have happily shared the fish with you.” Together, the friends catch more fish and have a wonderful dinner.

The mystery of what happened to the fish propels the story, while readers will admire Booby’s grace and generosity with his friends—even Peter the Panther. Inspired touches, like a barely noticeable paw swiping the fish at the corner of a page, or Mark the Owl’s response to Bobby’s friendly inquiry about the owl’s children—”They are a hoot!”—enhance the text.

That said, some lines could be easily trimmed, making it a more streamlined read. And while the artwork provides bright, pleasant animal characters, most of the characters are stiff-looking and only slightly change positions from page to page. (There is, however, one inspired layout in which a large bear paw reaches for fish swimming at the bottom of the page). Additionally, the type is often encased in white bubbles against colored backgrounds, making it difficult to read.

Despite such presentation issues, Bobby the Bear! and His Missing Dinner is a sweet tale, with a main character who reminds children that forgiveness is always a better choice than anger and that friends helping friends makes life better for all.