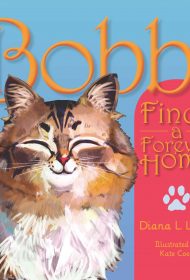 Diana L. Likely’s children’s picture book tells the true story of Bobbi, a Maine Coon cat who wandered into the author’s life and heart to find her “forever home.”

“Bobbi is a Maine Coon cat with a mysterious past,” writes Likely in the opening of Bobbi Finds a Forever Home, explaining that Maine Coon cats have long fur, thick fluffy tails and fur tufts sticking out from the tips of their ears and between their “toes.” They also have ruffs that “look like a lion’s mane.”

After this description, readers learn that Bobbi has been injured: “Did she get hit by a car? Did a human hurt her?” The queries are left unanswered. We then discover that Bobbi is living in the woods and has given birth to two kittens. The dedicated mama hunts for food so she can provide milk for her babies, and relocates her kittens almost daily to keep them safe.

One day, she smells chicken grilling at a nearby farmhouse and ventures up to the cook, Diana. Initially, Diana tries to find another home for Bobbi, but soon she realizes that they have formed a special, forever bond, leading to a happy ending.

Bobbi’s story is sweet and appealing, although the writing falters at times. Occasionally, the author provides detail that slows the pace (such as the long description of Maine Coon cats and Bobbi’s specific coloring), and shifting point of view that can be disorienting. The early description of Bobbi’s internal injuries (broken ribs and a fractured jaw) are never mentioned again, and might cause concern for young readers.

Although the illustrations leave large amounts of unused white space, they are uniquely stylized and attractive. An especially charming picture of Bobbi with Diana nicely captures the book’s warmth and message.

Despite its flaws, Bobbi Finds a Forever Home has considerable charm and will likely appeal to young readers, especially those with enthusiasm for animals or whose families are considering adopting a pet.