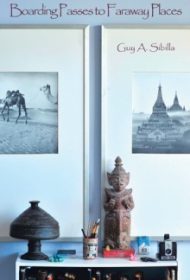 Guy Sibilla has been writing about his travel adventures for over 30 years. Here, he recounts eight of his journeys to out-of-the-way locales such as Myanmar, Pakistan’s Karakoram mountain range, and the jungles of Belize.

Sibilla comes by his travel habit naturally; his father was in the U.S. Army, and the family moved frequently. “Travel wasn’t a break from life; it was our life,” he writes. His stories aren’t typical travel pieces: He doesn’t rattle off the finest hotels, the best places to eat or landmarks to gawk at. While those things seep into the narrative, his focus goes deeper and is more reflective.

Consider the final chapter, about a trip to East Timor in the months after a two-decade war with Indonesia. The hostilities were over, on paper at least, but the devastation and horror remained. Spending time with U.N. Peacekeepers, Sibilla was so numbed by what he saw that he had to take a break from his notetaking, only to be reinvigorated by an encounter with four young boys who were playing at a deserted waterfront pier, squealing with laughter and simply enjoying life. He titled a photo of the four: “This is what hope looks like.”

Sibilla’s storytelling skills are evident on every page. His writing is clear, atmospheric and entertaining, showing humor and depth. A wonderful example is his account of being in a desert in the Middle East with two Bedouins when one of them insists he take a turn on the lute. The best he can do, he says, is a version of the Hawaiian song Waikiki, a rendition “even more appalling than I can fully express.”  Nonetheless, his companions “clapped joyously and hooted with glee.” It’s a beautifully told story of bonding between strangers.

Boarding Passes to Faraway Places is excellent not only as adventure/travel writing, but as a look at people from different cultures who aren’t so different after all. Readers don’t have to be travelers to appreciate this book.