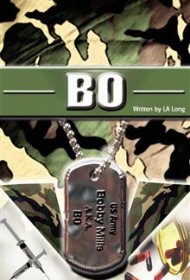 Bo is the story of best friends Annie and Bo, who have supported each other through hard times, including Bo’s stint as a solider in Vietnam, the death of his wife and his several relapses as a heroin addict. Now, the two confront the greatest challenge yet to their friendship.

The story begins by introducing Annie, a shopping addict with a fierce attitude and a habit of never paying her bills on time. As she sits on the front porch of her brownstone sipping wine and contemplating paying her cable bill, Bo returns from a month long vacation. Annie can immediately tell that something is wrong, and soon Bo reveals that he has been diagnosed with AIDS. As Bo is disowned by his family and fired from his job, Annie assumes the role of a dutiful best friend and, with others, works to help Bo rebuild his life.

Along with delivering a story of love and friendship, Bo explores the psychological grit it takes to be there for someone who is approaching death. It won’t take long for readers to get attached to these dynamic, relatable characters, each with unique voices and strong personalities.

LA Long delivers believable dialogue that leans on slang and casual language, adding personality to both Annie and Bo. Sometimes, however, the dialogue becomes jarringly formal, as in: “ ‘Well, Bo, I’ll ask you again, then why would you entertain the idea of moving into a place like that?” This sort of dialogue seems forced and inconsistent with the characters. Problems with verb tense and other grammatical errors serve as further distractions.

Bo requires thoughtful polishing to attract a wide audience. With the proper editing, however, it has the potential to be an engaging tale of friendship, love, and determination — a story that reminds you of why you fight so hard for the people you love.