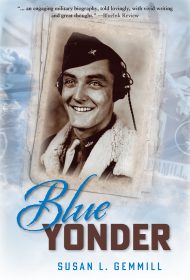 Susan L. Gemmill’s father, Bill Gemmill, was a bombardier on more than 50 WWII missions who took pride in his multitude of medals and decorations. But it wasn’t until his daughter’s son, an aviation buff like his grandfather, turned 20 that Bill opened up to Gemmill about his service. The resulting biography is more about “coming of age,” she writes, “than the art of war.”

Bill was a 17-year-old Chicago high school student when Japan bombed Pearl Harbor. He tried to enlist, but the recruiter gave him a student deferment, telling him to go to college first—he had two scholarship offers—and he entered DePauw University. Early in his freshman year, however, a military bomber crashed near campus, killing all aboard. He immediately joined the Army Air Force.

The author follows her father through his training and onto the European Theater. Along the way, readers meet his well-drawn, colorful crew: pilot Wes Powell, called Pappy because of his advanced age (26); co-pilot Jug Kell, a Georgia boy who loved his peaches and ever-present cigar stub; first engineer Mike Stohlman, a former rodeo cowboy who devoured western novels, and others.

Indeed, the “art”—and destruction—of war is here, but Gemmill goes deeper, showing her father wrestling with the world he’d been thrown into, one far different from his native Chicago. There are light moments: Stationed near L.A., he got to pal around with Dorothy Lamour and June Allyson. (His father was Lamour’s lawyer and his grandmother went to school with a woman who became Allyson’s guardian.)  And somber moments: When he visits the Vienna Parliament Building 15 years after the war, he tears up observing the damage his bombs had done: “[H]e hadn’t expected to see the results of his work still evident,” Gemmill writes.

Gemmill consulted with surviving members of her father’s crew to confirm the stories and reconstructed dialogue. Both contain the absolute ring of authenticity. She has done an excellent job here, delivering an engaging military biography, told lovingly, with vivid writing and great thought.