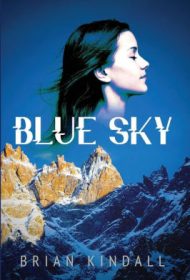 Brian Kindall’s middle-grade folkloric fantasy is a lyrical dream-like coming-of-age tale and powerful allegory of what it means to be human.

Found as an infant by an elderly ibex named Old Stone and raised in the high Alps among a herd of wild mountain goats, Blue Sky is told that her father was a fearless mountain climber and her mother was a fleeting dream. Resembling a “big white salamander” when she is introduced to the ibex herd, Blue Sky grows up quickly, basking in the majestic beauty of the high peaks during summer and struggling through the brutal winters.

Her worldview is shaken, however, when she sees a young alpinist stranded up on a perilous ledge during a storm. Sky climbs up to investigate and finds the boy unconscious and in imminent danger of falling off or freezing to death in the cold.

In a herculean effort, she uses the boy’s ropes to eventually get him  to safety. The boy—a “noble explorer” named Gaston—tells Sky stories about the wondrous world beyond the mountains, and it triggers in Sky a memory of her mother (who she thinks is a statue situated on a high peak), saying: “A dream needs its dreamer as much as a dreamer needs its dream.” Sky must choose between staying in the confines of the mountains or following her own dreams.

This is a strong story with a few minor flaws: A bit more description, especially in the story’s latter part, would have made the novel a more immersive experience, and the conclusion, while thought provoking, could have been more thematically powerful. These are largely overcome, however, by the story’s wonder-inducing tone and its endearing protagonist Sky, whose purity of spirit make her a character readers will identify with and root for.

At its heart, Blue Sky is a story about a girl beginning to find her place in the world. This theme should strongly resonate with Kindall’s intended audience.