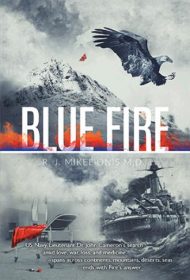 A medical doctor finds his career derailed by the Vietnam War and an intense love affair in R.J. Mikelionis’ debut, Blue Fire.

As a medical student, John Cameron questions some of the practices he sees. As an intern, he fights hard for his patients but is demoralized by the tragedies he encounters. Overall, he finds it hard to connect with people, sustain relationships, or feel part of the world.

When he’s called to serve as a shipboard medical doctor in Vietnam, the slaughter he witnesses demolishes Cameron’s faith in humanity. Adrift after his service, he travels Europe and in Athens meets Chris, a beautiful and mysteriously sad young woman who steals his heart. Their love is sudden and powerful, and when Chris disappears, Cameron tracks her through mountain and desert, growing increasingly unmoored from the world, until a final confrontation upends everything he thought he knew.

The insider’s medical knowledge is the novel’s biggest strength; for those of strong stomach, the hospital scenes are gripping and effective. Less evocative are Cameron’s relationships, even with people he’s supposedly drawn to. Scenes with other people devolve into terse, disembodied conversations: “’That’s it for today, Mel.’…‘See you at breakfast, Cameron.’” This might stop readers from becoming fully engaged or feeling that they know and relate to the characters.

The prose otherwise has remarkable range, at times playfully descriptive, at times spare and haunting. The imagery is most powerful when describing Cameron’s surreal perceptions, such as his hallucinations in the desert where he encounters the blue fire of the title. Certain descriptions are undeniably beautiful: the sun in Athens “was a transparent being, a crystal gem visiting the earth.”

For some, the moments of vivid language will make up for the overall lack of narrative development. While uneven, Blue Fire is readable and thoughtful in its suggestion that a man’s search for meaning may not, in the end, yield answers.