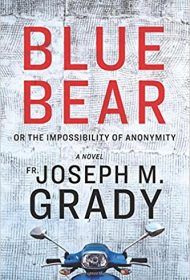 Graduate student Lucy Fox lives in a palazzo-turned-nursing home, exchanging volunteer hours for room and board along with a few other foreign students. These include Scott, a seminarian on whom Lucy has a crush; Lucy’s good friend Brian, who works as a clown for extra money; and newcomer Natasha, a South African with a mysterious past.

The most unusual character, however, is the novel’s narrator, Blue Bear. Blue Bear is just that: a blue bear who is Lucy’s spirit animal, and whom only she can see.

One day, on Lucy’s usual afternoon run, a fellow jogger accosts her and forces a set of keys on her. He tells her not to hand them over to anyone but him or “Ginevra,” then runs away. When Lucy returns home, the villa is a crime scene, the jogger from the park is dead, and the police arrest Lucy for the crime. With Blue Bear’s help, she regains her freedom, but another murder and menacing note threaten not only Lucy, but all the palazzo students.

Blue Bear features a page-turning story, characters that exasperate with their poor decisions but delight with their spirit and ultimately good natures, and a vibrant sense of place (including passages of Italian dialogue, accompanied with footnoted translations). Even minor characters receive their due, such as the nursing home resident who grows “more and more tipsy after each non-alcoholic cocktail” and eventually passes out mid-anecdote. In clumsier hands, the spirit-animal-as-narrator could be gimmicky, but here the title character is another endearing part of a quirky whole.

This is a spirited and highly entertaining novel. It’s sophisticated enough to appeal to adults, but the young, charismatic protagonist, exotic setting and fast-pace make it a potential YA hit as well.

BlueInk Heads-Up: The Star designation is awarded with the recognition that copyediting errors, particularly homophone and apostrophe mistakes, remain in need of attention.