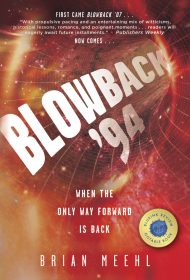 A magical cor anglais (a musical instrument also known as the English horn) has been in the Jongler family for generations. The horn can send people back in time, often against their will. Its latest victim is Octavia Jongler, a present-day scientist who disappeared into the past over a year ago, leaving her husband, Howard Jinks, and their teenagers, twins Arky and Iris.

Just before Iris’ audition for a prestigious summer music program and her prom, the horn whisks her and Arky back to 1894 Paris, in Octavia’s footsteps. The twins manage to find their mother, who is working at the fabled Moulin Rouge. They cross paths with Degas, Toulouse-Lautrec and “Le Pétomane,” who has turned his ability to break wind on command into a popular stage act.

The plot thickens when Arky falls for a ballet dancer who is “kept” by a vicious man, while Iris struggles to prove herself among the sexist members of the theater’s orchestra. Meanwhile, Howard is desperate to reunite his family. And two of the twins’ friends, who have repressed memories of their own time travel experiences (in previous series installments), begin an investigation of their own.

Blowback ’94 is fresh and fast-paced, with sympathetic “everyman” characters. For instance, readers will likely relate to Iris’ simultaneous wonder at rubbing shoulders with great artists and her concern over how she will find a suitable prom dress in 19th-century Paris.

Meehl’s writing is evocative as well. Newly arrived in Paris, Iris observes: “a faded poster proclaimed a circus come and gone, a black cat prowled a narrow passageway, a slapdash wooden fence encircled a tiny garden, the waft of manure billowed from a stable, another windmill towered above the rising hill of crooked streets.”

With its compelling writing, likeable characters and well-crafted plot, Blowback ’94 will find a welcoming audience in teen time-travel fans.