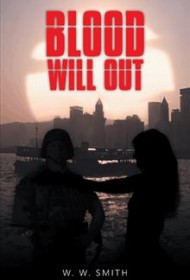 The novel’s hero is Jack Smith, a sniper for the British Royal Marines who has been seconded to the espionage services for a mission in Hong Kong. His mission is to infiltrate the estate of Sir James Hayworth, a minister in the British colony who is being groomed to become the city’s next police commissioner. “Jack’s job was to ensure Hayworth’s life was lily-white,” Smith writes. “One sniff of suspicious activity and the position would be snatched away without the man even realizing it.”

Taking a job on the class-structured Hayworth estate, Jack quickly realizes things aren’t rosy when he meets Diana Hayworth, the minister’s wife and daughter of an Australian cattle baron. Hayworth’s rise to power has been funded by blackmailing Diana’s family. For their investment in his career, the unscrupulous minister hides a scandalous family secret about Diana’s mother. The minister also turns out to be a violent abuser who beats his wife so badly that she loses a child to miscarriage.

Jack swings into action, plotting with his comrades to disappear the “obnoxious bastard,” while falling in love with Diana in a corny romantic subplot and later being sent on a mission to plug a security leak in Libya, where he is badly wounded.

In addition to the off-putting romantic subplot, stilted dialogue hampers the novel (”The world’s our oyster,” Jack pledges to Diana. “But you’re right, we need to get rid of James Hayworth.”) The plot is also disappointingly uneven; Jack’s frequent war flashbacks aren’t very illuminating, while Diana’s numerous internal monologues rarely advance the story. All these flaws threaten to derail Jack’s arc of redemption, but like British heroes do, he manages to finish the book with a stiff upper lip. Readers who can do the same will find themselves intermittently entertained despite the story’s weaknesses.