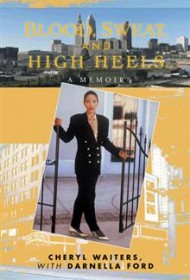 In 1994, Cheryl Waiters was featured on ABC’s Good Morning America, highlighting her role as the only female electrician working on the construction of Cleveland’s Jacobs Field and the Gund Arena (now known as Progressive Field and Quicken Loans Arena, respectively). Written with Darnella Ford, this is Waiters’ story before GMA.

Waiters grew up bouncing between dysfunctional parents in Cleveland and Buffalo, New York. Her father, a small-time hood-turned-barkeep, was largely disinterested in his children; and while her mother at least didn’t abandon her brood, she was more interested in partying than parenting.

Growing up in the early years of women’s lib, Waiters was determined to be more than a wife or mother, and she broke down barriers even as a child. While other girls her age were mostly learning homemaking skills, she was tagging along to jobs with an electrician uncle. Following a brief career in the military and obtaining an associate’s degree in mechanical engineering, Waiters joined the International Brotherhood of Electrical Workers, where she was one of the few female electricians – hence, her GMA appearance.

Ford captures Waiters’ sassy, smart voice perfectly while sharing vivid stories of growing up as a black female in a society that mostly valued white males. Even after women’s lib and the Civil Rights Movement took hold, Waiters was the subject of sexism and racism. She likens it to being “confined to life on Earth as aliens disguised as human beings – when we felt like anything but human at all.”

Although the book deftly covers a big chunk of Waiters’ life, readers will wonder what happened after her GMA appearance. We know she persevered as an electrician, but did the blatant racism and vulgar harassment from her coworkers continue? And, was Waiters able to succeed as an electrician while being a wife and a mother?

These things are left unsaid, which makes one hope there’s a sequel to this lively memoir in the works.