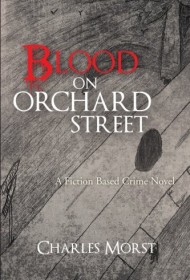 Fast-paced crime series are an evergreen market for writers; there’s an insatiable appetite for thrillers that can be read quickly. In this tradition, but with problematic delivery, Blood on Orchard Street is the first in a planned series of crime novels by author Charles Morst.

Mike Hallman is a ten-year veteran of his small-town police force. He and his partner Brandon are called out to the scene of a murder, and from there, the author’s plot begins to spiral out of control. How far out of control? The aftermath involves disappearing corpses (actually dummies made from spare body parts), grave robbers, a criminal mastermind with a reverse-aging disease a la Benjamin Button, most of the characters turning out to be related and—more. It’s a bumpy ride, to say the least.

Morst makes things harder with his use of almost indecipherable prose. Quotation marks come and go, and many sentences end with a question mark for no reason. He also includes parenthetical sound effects: “It was a little after twelve, and we rushed to the squad car, hoped [sic] in and put on the lights (Siren Blaring).” Such additions might be appropriate for a screenplay, but they don’t belong in a novel.

A mystery full of murder, mayhem, interrelated criminals and switcheroos could easily be a bestseller, and Morst deserves credit for aiming his efforts in a marketable direction. But the work must be polished, to say nothing of achieving basic readability, in order to generate suspense and interest. There’s a kernel of a story here, but Blood on Orchard Street doesn’t deliver on the fundamentals that would turn that idea into a compelling read.