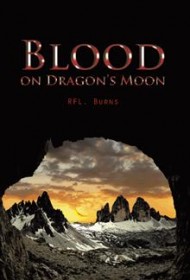 Blood on Dragon’s Moon is a fusion of military and epic fantasy, a story sabotaged, unfortunately, by many technical errors.

The story revolves around a Dark Lord (Jerrak) who, after being defeated, has gathered together his powers and is attempting to spread his evil reach over the realm of Nennetta. As his Dark Army grows, the various races populating the realm (humans, elves, dwarves, dragons, orcs, etc.) must overcome their differences and join together to defeat Jerrak and his minions.

While the storyline is formulaic, there are bright spots: The action is virtually nonstop from the first page to the last, and the giant Cobralins—“an unholy cross between a human and a cobra” —make for fascinating and scary soldiers in Jerrak’s army.

The novel falters, however, in large part because the book doesn’t appear to be properly proofread, and the author published the story before it was adequately polished. There are literally hundreds of grammatical and typographical errors. Ironically, there is even a mistake on the Acknowledgements page: “Thanks to my mother for proof readying [sic].” The errors come as fast and furious as the action in the storyline. Common words are misspelled throughout; for example: “These puny insects flee at the sight of one dragon, what a waist! [sic]” Even the names of main characters are misspelled, and necessary commas and periods are often missing.

Putting aside these drawbacks, there is still a decidedly unfinished feel to this novel. Character development is nonexistent, as is world building and any kind of complementary description in general.

With so many glaring errors, the novel mostly serves as an example of how a potentially entertaining story can be derailed by a lack of attention to detail.