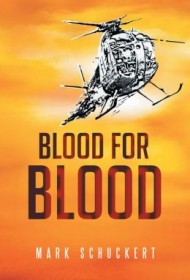 In his novel Blood for Blood, author Mark Schuckert portrays the ongoing war fought by a disillusioned Vietnam veteran in the hills of northern California. This fast-moving adventure follows a friendless former soldier, known only as the “Grower,” in his pursuit of payback for the wounds he suffered at the hands of a government he only sought to serve. Now prepared to use his military skills against the very people who taught him to kill, the Grower will stop at nothing.

Schuckert, himself a Vietnam veteran, provides the Grower with an impressive arsenal, and an intimate knowledge of guerilla warfare tactics. The author launches right into the action, with a police raid on the Grower’s marijuana fields. The cash crop is quickly revealed as a trap, and dozens of officers swiftly go up in mortar smoke. More troops are on the way, and the chase is on.

This is a modern take on the classic American story of a lone gunman trying to survive against all odds. If you’re the kind of reader who’s looking for nuance, complex relationships or multi-faceted characters, you should look elsewhere. The people in Schuckert’s world are not subtle; they believe they are on the right side and must defend it.

If you are drawn to action-adventure stories, however, you will find this story compelling. Schuckert’s writing is vivid, and his images often shocking. He maintains high drama throughout, with attention-grabbing details such as blood spurting from battle wounds and decapitated heads hoisted on high tree branches. The sheer volume of artillery involved is gripping all on its own. Schuckert maintains a non-stop chase at a heart-thumping pace, and the Grower will have you rooting for him at every turn.