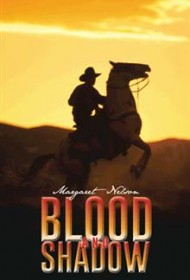 Blood and Shadow, a slim western novel, brims with all of the “gun-tote’n” swagger many readers have come to expect from the genre.

The story takes place in the mid-1800s, when Bonita Valdez Rand and Andrew Hilgendorf meet on a stagecoach bound for New Mexico. Once there, Bonita intends to revenge the murder of her husband by Chad Donovan, owner of the Bar CD Ranch and host to a band of cruel and unruly outlaws. Andrew, under the guise of cowpuncher, hopes to find his brother Nick Doran, not heard from since the end of the Civil War.

On arrival, Bonita recovers her stallion, Shadow, stolen by Donovan when her husband was killed. Soon, Andrew saves another beautiful stallion from mistreatment by Donovan’s crew and dubs him Blood. Shadow and Blood establish incredible bonds with Bonita and Andrew and manage dramatic physical feats as the story unfolds and the characters fight Donovan and his unlawful bunch.

Although the book’s title seems suggestive of larger implications than the names of the horses themselves, no metaphoric connection is established that could give meaning to the story’s blood, machismo, and violence. The tale fails to explain the reasons that might have led to the malevolent actions taken by both the good and bad guys; “shoot ’em up” is the answer on both sides.

In general, readers will find the story difficult to engage with. The first 29 pages are a tangle of backstory, unbelievable situations and dialogue, too much telling and too little of trusting in the plot to reveal the nature of characters and the purpose of their actions. Just as the tale shows signs of hanging together and begins to move forward, the narrative ties that connect characters and their actions come undone, and the story quickly stalls.

In the end, readers will struggle to make an emotional connection with the author’s characters and, unfortunately, with the story as a whole.