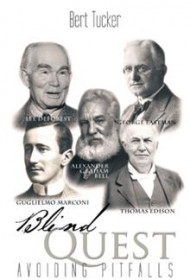 In the author’s 2007 novel Blind Quest: Deceived by Experience, seven present-day experts – each with a Ph.D. or an M.D. – time-travel to 1905 to observe history without intervening. In this sequel, these experts return to the same year with a different intention: they bring modern-day electronics and communication devices to rescue humanity from a future global catastrophe ignited by Middle Eastern terrorists.

The time-travelers – often called “the Columbians” because they arrive in the Columbia II space shuttle – work with disparate leaders, including Booker T. Washington, George Washington Carver, Theodore Roosevelt, John D. Rockefeller, Susan B. Anthony, Upton Sinclair and many others.

Their visit involves train travel across the United States to help with existing problems (e.g., slavery in the South) and to prepare in advance for disasters (e.g., the 1906 San Francisco earthquake). The Columbians conclude their journey a few months later in Europe, where they form a Security Council to work toward high-tech communication between countries and to act as a peacekeeper. Their mission, to which the subtitle refers, is to work as agents of change with the best minds of the earlier generation to help mankind avoid pitfalls. The story also includes occasional personal detours, such as when team leader Gen. Charles Anderson meets his grandfather as a young man and attempts to alter his family’s future through immunizations.

Although categorized as science fiction, Blind Quest reads more like a well-researched nonfiction history textbook, with footnotes and long blocks of historical quotations, rather than an actual novel with flesh-and-blood characters. With disproportionately lengthy segments of plodding dialogue and numerous historical references (compliments of the author’s personal library of more than 4,000 nonfiction antiquarian books from that era, as noted on the back of the book), Blind Quest: Avoiding Pitfalls should appeal to history buffs far more than to science fiction aficionados.