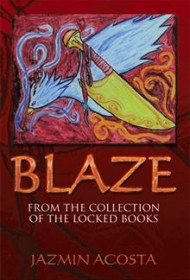 This imaginative, though sometimes confusing, fantasy takes place in another world where “Phoenix Children” (who are actually adults) have magical powers to protect their people and land. Also known as Elemental Children, they are thought to be immortal.

The story begins with the shocking news that Lady Blue, the elemental child for ice and water, has died, apparently from drowning. Soon other Phoenix Children and their attendants are either dead or missing. Immediately after Lady Blue’s demise, the ill-tempered Lady Red (whose element is fire and secret name is Ada) gets kidnapped by the thief, Phesoj. They are joined by Phesoj’s violent young protege, Olem (also known as Golden Eyes).

Phesoj’s mind has been clouded by the dark magic of someone else, and he doesn’t know whether he’s a murderer or merely a thief. He and Ada enjoy their angry banter, and to some degree, her physically aggressive tendencies. There might even be a romance blossoming.

The story presents several stumbling blocks. Readers will likely have difficulty remembering duplicate names for things and people, including Jai, a character who enters late in the story and is alternately called Knowing Book. In addition, the text contains awkward background information dumps (titled “Informationals”), material that should have been seamlessly woven into the story. And mechanical errors are common, as in: “Remember when you first obtained hat [sic] green power of yours, which was the combined power of my dearly deceased brother and that hore [sic] he tolorated (sic) on him.”

Although the book seems targeted to young adults, it includes considerable violence, such as stabbing, drowning, poisoning, and torture with an eye-mutilation machine.

The book appears to be the first title in a planned collection about The Elemental Children. With aggressive editing and rewrites of the “Informationals,” Blaze could perhaps be the beginning of an intriguing series. As it stands, readers will find many obstacles to enjoyment.