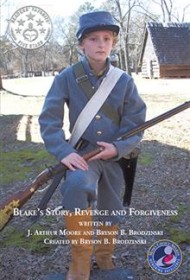 Blake’s Story, Revenge and Forgiveness, is unusual in three important regards: It views the American Civil War from a child’s point of view; its protagonist sees battle with both Confederate and Union armies; and it’s the work of a man and his great-grandson. According to J. Arthur Moore’s “Author’s Note,” his great-grandson Bryson B. Brodzinski suggested the plot, began the novel’s “Prologue,” served as a model for Moore’s photo illustrations, and edited sections as Moore researched and wrote the book.

Moore’s 41 years of teaching and experience writing two previous historical novels serve him well in fleshing out his great-grandson’s ideas, and his self-described “amateur” photo illustrations are adequate to the story.

This chapter book begins when Blake Bradford, 11, learns that his father, a Confederate captain, has been shot and killed in the battle of Shiloh. Blake wants desperately to join the army to find and kill the young Union soldier who reportedly shot his father. But Blake is too young even to serve as a drummer. He bides his time, learns better how to hunt, shoot and drum, and runs away to join the military before turning 12.

The narrative includes actual military leaders on both sides and describes long marches, poor food, and some carnage. It shows how leaders barely protected young enlistees and used them to perform highly dangerous courier services and front-line killing.

When injured during a courier run for the Confederates, Blake is rescued by a teenaged Union soldier who was traumatized by killing a man in battle. Behind Union lines, the two form a friendship that sustains them through frightening battles, rare moments of boyish play, and an emotionally wrenching revelation.

Ultimately, much hinges on a key coincidence that most readers will accept and welcome. This well-crafted collaboration is engrossing, memorable and an excellent conversation-starter about the war’s ills, the drive for revenge, and the profound power of friendship and forgiveness. It is highly recommended for young adult readers.