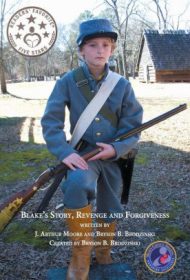 In J. Arthur Moore’s middle-grade book, conceived by his great-grandson Bryson, a boy joins the Confederate army to seek revenge against the Union soldier who killed his father.
After Lincoln declares war, 11-year-old Blake watches his father Micah leave their plantation to join Confederate forces. Months later, Blake’s family learns Micah was killed in battle. Blake vows to kill his father’s murderer but keeps his plan to himself.

Blake leaves home, cons his way into joining the Confederates and is captured by the enemy. He becomes friends with Matthew, a Union soldier, and his comrades.

Eventually, Matthew confesses to Blake that he suffered horrible emotional trauma from killing a rebel and never wants to kill again. Here, the story demands a leap in logic: When Blake learns that Matthew killed the soldier at Shiloh, he suddenly concludes, with scant proof, that Matthew was the one who killed his father. Readers may have a hard time suspending disbelief here.

Additionally, while Moore’s realistic dialogue flows well and he has created a wonderful cast of characters, descriptions of battle movements are confounding: “…the supplies were delivered to Smith’s army and Lieutenant Warren and his company were back with their 2nd Tennessee in General Hill’s Brigade of General Cleburne’s Division of General Kirby Smith’s army.” The author could easily forgo these unnecessary details and hard-to-read maps.

That said, Moore brings the war to life with rich descriptions of battle, suffering soldiers, and beautiful moments: “As…the air hummed with the quiet conversations of a thousand soldiers, drummers throughout the brigade sounded taps. A myriad of flickering candle lanterns began to wink out and the blackness of the heavens was flooded with a carpet of twinkling stars.”

Readers will need to persevere through the confusing parts, but they will be compelled by the novel’s characters and storyline and happy with its sweet, surprise ending.