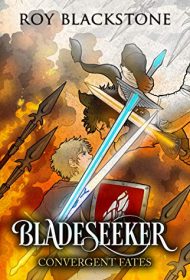 In Roy Blackstone’s Bladeseeker, a diverse band of heroes are intent on finding the same prize: a set of ancient artifacts with magical powers.

The characters seek a set of “Soulblades,” storied swords with magical properties that could very well determine the fate of Taerestris, Blackstone’s imagined world. The holy relics can harness magic and wield widespread physical destruction. Each holds a “persona,” a unique spirit that animates the blade. Together, their reappearance would have the potential to realign the power structure of the world’s races and ultimately influence an epic war between good and evil.

Blackstone weaves a narrative through the shifting perspectives of a cast of well-drawn and intriguing protagonists, each with their own motivations, missions and compelling backstories. Among the characters seeking the Soulblades is Kai, a slave girl who escapes bondage to partner with dragons on her quest; Tyr Lancelt, or Red Shield, hoping to retrieve them for the king of Nemea as his mission ultimately connects him with an accomplished knight; and a pair of seraphs who live in the airborne city of Skyfall, whose existence is threatened by the Soulblades’ magic. The book explores the characters’ distinct journeys, eventually weaving their travails together in an elegant and interesting fashion.

Blackstone’s imaginative setting is similarly accomplished. His world is populated by myriad monsters, creatures and magical phenomena. The seraphs, for example, shine as otherworldly entities forced to descend to the terrestrial world to save their celestial existence.

Occasionally, the changing perspectives and stories interrupt the sense of continuity. But the author’s straightforward style quickly invests readers in the characters’ fates, and their common quest is a clever way of uniting their separate journeys. The author ends the book with promises of more adventures, so more context and details about Taerestris are forthcoming.

Bladeseeker offers a compelling journey for any reader who appreciates the subtleties of a rich and varied world, told through a fascinating set of perspectives.