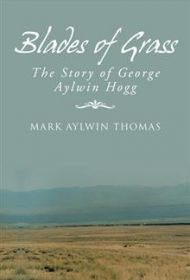 In Blades of Grass: The Story of George Aylwin Hogg, Mark Aylwin Thomas recounts the life of his uncle, a British explorer caught up in the Sino-Japanese War of 1937 and the Chinese Civil War.

Shortly after graduating from Oxford, Hogg embarks on a worldwide trip that eventually brings him to China in 1938, where he decides to stay. He begins reporting on the country for United Press and becomes involved with grassroots industrialization efforts. His observations form the basis of his own book, I See A New China, published in 1944.

Hogg, however, is most known for leading a technical school associated with the industrial cooperative movement for 60 orphaned boys. In the face of encroaching Japanese advancement, he subsequently relocates the school after an arduous 700-mile journey. Seven years after arriving in China, he dies at age 30 from tetanus that infected a stubbed toe injured during a basketball game with the boys.

Blades of Grass follows Hogg’s life from childhood through death. As Thomas acknowledges, Hogg’s own letters and articles comprise most of the material. In Chapter Three, for example, Thomas supplies one introductory paragraph while his uncle’s letter spans the remaining seven pages.

Hogg’s lyrical anecdotes of the people he meets provide insightful firsthand accounts of war-torn China. He writes descriptively, whether describing his own travails or those of others, such as the peasants who “had lived through the fury of a war, seen the snuffing of hopes and happiness, felt the birth of bitterness.”  Thomas himself also writes gracefully. He reflects that Hogg knew “he had to build where others destroyed; not to build edifices, but to build human values.”

The book could benefit from Thomas shaping the narrative more by redacting lengthy extracts and cogently presenting Hogg’s story in his own words. Nonetheless, this narrative provides an intimate window into modern Chinese history. Readers will also appreciate the included photos, recommended reading suggestions, and sources.