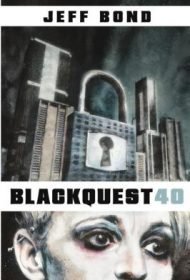 Jeff Bond’s techie thriller Blackquest 40 is like a treatment for a Die Hard sequel for the #MeToo era. Instead of hard-boiled macho cop John McClane as a protagonist, it centers on a hotshot young woman coder, Deb Bollinger.

Similar to the 1988 Bruce Willis movie, the book takes place entirely in an office building, this one in San Francisco, owned by a software development firm, Codewise Solutions. Gifted lead coder Bollinger blows off a mandatory employee training exercise called “Blackquest 40” run by an outside company, Elite. Instead, she stays at her desk to work on a personal side project to help homeless people, as she grew up homeless herself.

When Bollinger discovers that Blackquest 40 has cut off all exits and access to the building, she determines that Elite is actually using Codewise’s (and her) talent to develop software on a tight deadline for sinister purposes.

Much of the book is chockfull of thrilling action. Bollinger hides in broom closets and air ducts, trying to escape the locked-down facility. She also uses an array of techie toys she’s made, such as a drone, remote-controlled Hot Wheels cars and a swarm of robot dragonflies.

Non-tech-savvy readers might occasionally get lost in the digital jargon, as in: “Jared’s module is stuck at 25 percent test compliance. Half his interfaces don’t have a single line of code written. To Paul’s knowledge, the prototype hasn’t escaped its sandbox—the overriding goal of that piece of the program—once.” Yet, Bond can write fluid, engaging text, such as this description of Bollinger’s pain after being attacked, “My body throbs. My lungs take air in giant, quivering pulls.”

The book starts off a bit slow while Bond establishes the various characters. But once the action gets rolling, about a fifth of the way through, it doesn’t stop until a satisfying surprise ending. In all, Blackquest 40 is a page-turning thriller that will particularly appeal to tech-savvy readers.