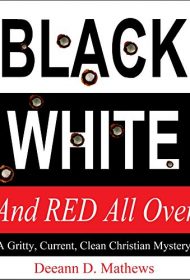 Deeann D. Mathews’ debut is an entertaining drama and a sharp denunciation of the anti-black racism endemic in the U.S.

In 2019, police stations across mostly rural Lofton County, Virginia, are in turmoil because the new black-run newspaper, the Lofton County Free Voice, has used the Freedom of Information Act to request ten years of court records involving black defendants. Ironwood Hamilton, retired military and the new police captain of Tinyville, realizes that dozens of cases now in his jurisdiction were wrongful convictions. When he makes the deeply unpopular choice to re-open the biased cases, he allies with his cousin, past member of Special Forces Henry Lee, and the Free Voice, to defeat those willing to use violence to protect their corrupt ways.

Mathew’s writing is lively and witty, although the story also has flaws. There’s an over-reliance on expository, repetitive, and didactic dialogue, and scenes generally lack a strong sense of place. Readers also may feel uncertain about the protagonists’ goals and motivations, although their principles are clearly delineated. Pacing sometimes lags, and there’s a long build up to dramatic action that’s over quickly.

Additionally, the characters’ strong commitment to Christianity leads to frequent moralizing, but they make spot-on assessments about how faith can be twisted to support white supremacy or, as Hamilton argues, about how racism always has a profit motive.

Set in 2019, Mathews’ book is less a mystery than a bold confrontation with racist policing. There’s a fantastic element in the way many white characters descend from famous Civil War figures. While police captain Bragg still fights for the Confederate cause, Lee, the “great-great-great nephew” of the infamous general, is the “consummate professional officer,” noted for his controlled manner. The allegory emphasizes the long pedigree of Southern racism, but also seeks to repair it.

Overall, the story is enjoyable for its lively action, moments of humor and bracing education for readers on how, like Hamilton and Lee, to be effective anti-racists.

Also available as a ebook.