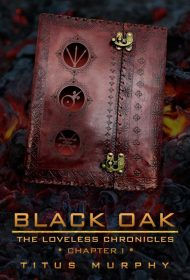 Titus Murphy’s horror novel Black Oak, the first in The Loveless Chronicles series, interweaves a legacy of monsters and magic with the very practical concerns of its protagonist.

The story opens in 1782, amidst a battle that pits witches and “Hunters” against a group of savage werewolves known as Jackals. The narrative then shifts to 1815, with townspeople fighting the Riffs, creatures who are half-vampire and half-Jackal. The group plans to secure the town with a spell, and the novel’s present-day section begins.

This portion starts with Mark, a young truck driver, finally asking out his longtime crush, Sharon. Although it turns out that Sharon returns his feelings, Mark’s happiness is tempered by strange goings-on, including a shadowy figure in the woods and two teenage newcomers who look like they belong in the 18th century. As Mark, Sharon and their friends grapple with day-to-day problems, including the revelations of family secrets, it becomes clear that a centuries-old evil has the town in its sights once again.

The contemporary portion of the novel features appealing, relatable characters. Murphy’s ability to create a protagonist whose mental illness (mild schizophrenia) doesn’t define him is particularly commendable. The relationship between Mark’s friend Ron and Ron’s brother, who has just been released from prison, is also realistically and sensitively handled.

The horror element, however, is not as successful. The historical sections have a slapdash element, with hasty info dumps and dialogue that feels inappropriate to the period (e.g., “Look at the newbie…That shit will get us all killed”). Also, by revealing so much in these early chapters, Murphy greatly reduces the suspense in the contemporary section. (In fact, the novel would function quite well entirely without the historical portion, leaving readers in the same disoriented and unsettled state as the main characters.)

The issues noted create a disappointing read overall. Substantial revision is required to allow the story’s compelling characters to shine.