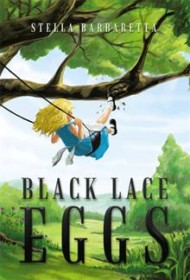 It’s a pleasure to watch a spunky girl take on the world with imagination, energy and an innate sense of justice. Marley Gayle Kellerman, protagonist of Stella Barbaretta’s Black Lace Eggs, does just that in a coming-of-age novel set in rural Pennsylvania in the 1950s. Despite problems with perspective, the author creates a strong, memorable character.

Introduced as a tomboy who wears a toy gun and holster and pursues imagined villains while riding a beat-up broomstick as her trusty steed, Marley Gayle’s spirit is not broken when her troubled mother gives the girl frequent beatings.

Defying her mother and risking more punishment, Marley Gayle befriends a black man called Lucas who works for a neighbor’s family until he mysteriously disappears. When she prefers the company of this gentle man over her former childhood buddy Freddie, the latter begins a twisted obsession with Marley Gayle that eventually comes to a frightening head. Meanwhile, the gutsy girl grows into a likable adolescent capable of opening her heart, not just to her new boyfriend but also to someone else quite significant to her.

Barbaretta needs a copyeditor and a better command of point of view. Told in the third person, the story is centered in Marley Gayle’s perspective and should stay there instead of suddenly jumping into the internal thinking of others, as when “the teacher resumed speaking and a little suspicion hit her.” (It would be better to write: “The teacher seemed suspicious as she resumed speaking.”)Romantic interludes are awkward, as well. In one scene, the protagonist and new boyfriend “fell into each other’s arms as they lie in the hay.”

Black Lace Eggs also deserves a more engaging title that delivers a sense of its complex protagonist rather than a reference to the way her father fries eggs. Despite these flaws, the character of Marley Gayle is special and will win the hearts of many.