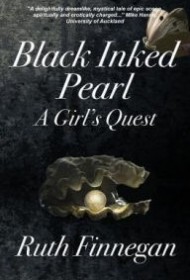 Growing up in Donegal, Ireland, Kate is courted by an unnamed suitor whom she rejects when she is 15; years later, abroad in Africa, she has a romantic epiphany and she sets out to find him. In a series of near misses, symbolic encounters, and supernatural events, Kate and her mysterious suitor ultimately journey through heaven and earth (literally) to reunite.

Black Inked Pearl consciously blurs the line between poetry and prose, and that experimental style is its greatest strength. Finnegan’s narrator has a chatty, digressive voice that is engaging and distinctly Irish. Kate’s childhood is rich and atmospheric, her African odyssey evocative, and the chapters taking place in heaven effectively recall Milton.

But the stylistic success of Black Inked Pearl is juxtaposed with the execution of its story, which begins with a simple premise but at every turn obscures the action with confusing or contradictory events. In multiple scenes, Kate tries to reunite with her suitor seven years after rejecting him, but in one passage, she is in her 40s and another time he is in a retirement home, resulting in an incomprehensible timeline. Her lover’s name is never revealed, and Kate assigning him a name is the essential plot point—but why wouldn’t she know the name of her childhood friend? And he seems haunted by his need for her forgiveness, but if it is for more than trying to kiss her once as a teen, the trespass is not clear.

Readers are actually well-rewarded for putting aside questions and simply letting the poetic language wash over them, but the experience is incomplete.To that end, the book is a sort of Rorschach test: Some readers will fall in love with the language, but others will be left feeling frustrated by the many unanswered questions.