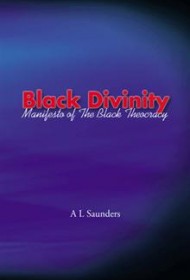 In Black Divinity: Manifesto of the Black Theocracy, veteran Brooklyn, New York, Crips gang member A.L. Saunders has crafted an ambitious cultural, social and religious portrait of the importance of black people from ancient times to the present.

Up until the atrocious behavior of white Europeans and later white Americans, in the form of ethnic prejudice, exploitation and slavery, blacks were seen as divine and revered for their wisdom, education and dedication to family, Saunders argues. Western culture destroyed this view, but in the last century, Afro-centric organizations including the Nation of Islam, the Black Panthers, and gangs have tried to take back the respect that was usurped.

“At this time the black man has lost all sympathy from the nations and has become a joke, a byword, an unnecessary embarrassment to the social fabric of most Western societies…But black divinity will be fighting to change all that,” the author writes.

Saunders flies the reader from ancient Egypt through the time of Plato to Paul’s vision of Jesus through the Marxist theories of the 19th century to show the importance of African influence as well as how philosophies slowly undermined a race. He lands us on the urban streets of today where gang culture exhibits the same mythic qualities of the African culture of old.

Saunders is an intelligent and persuasive chronicler. His prose is overall easy to read and understand and his fire for justice is admirable. The book is, however, in need of some editing. For instance, his later chapters discussing the plight of contemporary black men would have served the book better had they come at the beginning. Moreover, there are dropped words and unclear sentences that a seasoned copyeditor could have easily fixed. Overall though, Saunders’ call to action is clear and will challenge readers from many walks of life.