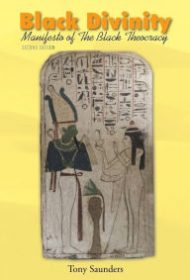 In Black Divinity, activist Tony Saunders offers a criticism of white society and politics, and a defense of blacks in contemporary times.

The author, a member of the “godbody,” a black empowerment movement that grew out of the Nation of Islam in the 1960’s, is issuing a call for blacks to understand their own self-worth in the face of centuries of oppression and misunderstanding of Afro-centric culture. “Once we begin to define ourselves as divine and see the genuine divinity in ourselves,” Saunders writes, “then we can move from under the heel of history.”

In essays that are academic in tone, the author offers an analytical look at the problems of modernity, including racism and economic inequalities. Inspired by the revolutionary philosophies of Karl Marx and Friedrich Engels, Saunders argues for a refocusing of mankind away from materialistic society while delivering a scathing criticism of global governments, especially the U.S., whose military, economic and racist programs have created the “tragedy of the black man…in Africa [and] the Diaspora.” Yet, while Marxism views religion as the opiate of the masses, Saunders believes in divine law and wisdom.

Saunders offers an impassioned exploration of such topics as Western philosophy and religion, ancient Egyptian beliefs, the writings of St. Paul, biblical mysticism and more,  contending that ancient teachings have been misused and misinterpreted by those looking to subjugate others. His approach is methodical, and his prose is generally clear, although the text includes occasional misused words (e.g., “affectively” vs. “effectively”) and some distracting, convoluted phrasing (“I can also see that something very important for we gods to understand, and which interestingly enough has been kept hidden from us…”).

While in need of editing for such issues, this message of personal transformation through understanding history is boldly argued overall. Those interested in contemporary views of racism, Marxism, and the history of class struggles will find in these pages an insightful, provocative look at the struggle for inner- and cultural-transformation.