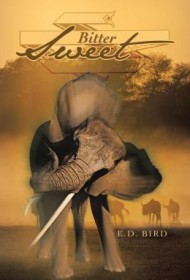 The deaths of loved ones perpetrated by men from a crooked multinational company prompts family members to exact revenge in this fast-paced, yet underdeveloped mystery.

The book’s prologue explains that wealthy widow Julie Curl has hired private investigator Sabrina Shire to unearth the circumstances of Julie’s husband Ben’s death. After Sabrina herself is killed, along with many shareholders who had invested heavily in a gold mining company named Goldenviron, several suspects disappear.

Julie then hires Sabrina’s husband, who, along with Julie’s two brothers begins connecting the dots leading them to the ruthless perpetrators. Tensions and danger rise as their friend Chester (a previous Goldenviron employee) and his girlfriend, Tabatha, are kidnapped and their lives threatened. Mayhem ensues after the search group travels from South Africa to Barbados while in pursuit.

E.D. Bird’s action-packed book is at its best in detailing gruesome torture scenes and danger in a game park when a raging bull elephant charges after Tabatha while she and Chester make their escape. “The elephant was crashing through the trees like a monster; they were no match for his great size, weight and strength. Branches as thick as his thigh were snapping like twigs as the animal bulldozed his way through the Mopani trees.”

Unfortunately, the book fails to transport readers because the main characters are minimally developed and mostly one-dimensional. In fact, readers learn more about the bad guys than the good guys. Neither is it possible to care about the fates of Sabrina or Ben because their backstories and character traits are virtually ignored. Misspellings also are a distraction (for example, “heals” for “heels”; “intension” for “intention”).

Given stronger character development, this narrative has potential. As it stands, however, the flawed story offers limited appeal.