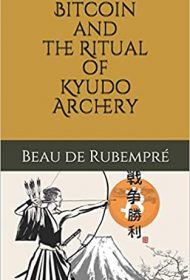 Beau de Rubempré’s Bitcoin and the Ritual of Kyudo Archery begins as an exploration of the differences between human memory and computers and eventually morphs into something akin to a love story wrapped in a techno-thriller.

Bitcoin is all the rage, but most people don’t know that a 12-word phrase that acts like a password is the only safeguard keeping the cryptocurrency from hackers and thieves. The phrase is almost impossible to remember, and no method of external safekeeping is completely secure.

Anton Gunzburg is tracking the man who attacked and later killed his mentor, Daniel Dunne, to steal his secret phrase and access his wealth. Anton follows the man to Paris, but instead of finding him quickly, he meets characters that submerge him deeper into the city, and allows personal diversions to interrupt his mission.

The story’s plot is only somewhat engaging, hampered by constant shifts between past and present and an overstuffed agenda. Still, Daniel’s backstory—he’s a brilliant man whose thoughts Anton accesses through his writings—keeps the pages turning, and the writing itself pulls readers in. De Rubempré establishes an elegant style with touches of atmospheric noir: “Anton opens his eyes in the middle of a dream: a hailstorm rages on the Eiffel Tower. Sophie’s eyes are gazing into his as in the old days…He hears the soft voice of that French singer, Brel. The song is the same he was singing before Anton fell asleep.”

The story is as much about Anton’s relationship with Sophie, his longtime girlfriend, as it is about Daniel and cryptocurrency. When the couple is together, the prose is often elevated, and tiny details like “drops of sweat” or the fact that “their favorite moment in bed comes after daily practice at the kyudojo” infuse this numbers story with human feelings.

The result is a strangely beautiful globetrotting narrative that, while not as propulsive as the best thrillers, still manages to be an intriguing read.