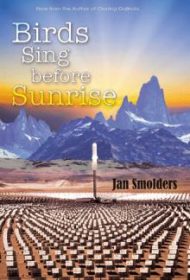 When solar specialist Frank Anderson is encouraged by his activist wife Joanna to take a job in Peru, neither realize how dangerous this new venture will become. Joanna remains in California with their children but rushes to Frank’s side after he’s dragged from a car and harshly beaten—only to find herself kidnapped.

Who is behind the attacks on the Andersons? There are plenty of suspects, from local workers fearing that solar power will take away their jobs, to powerful politicians and special interest groups back home in California resistant to the growing green movement.

As the story moves between Peru and California, differences in culture and geography of the two countries are successfully integrated in the storyline. However, between Frank’s colleagues in both countries, Joanna’s activist friends and enemies, the kidnappers, and a plotline involving Joanna’s sister, it’s hard to keep track of who’s who. Frank and Joanna are engaging characters, but as the story unfolds, they take a passive role in the investigation, leaving others—the manager in Peru and Joanna’s sister—to uncover the conspiracy threatening their lives. Frank, in particular, doesn’t grow or develop as the story progresses. Joanna, although outwardly deferential to “her man” as she repeatedly calls him, is clearly the stronger character.

The language here is stilted at times, and sentences often confound: for example, Smolders writes of a frightening drive in the dark, in which “Frank squeezed his stomach muscles hard and resorted to prayer when the headlights shone zombielike into a forbidding sky of stark, threatening, wet emptiness.” Instead of trusting his dialogue to speak for itself, Smolders overuses dialogue tags and explanations, which also slow the story’s pace.

Such issues impact overall enjoyment. Still, those who are drawn to compelling plots will find rewards in this environmental thriller.