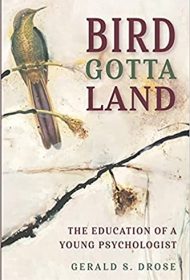 In his novel’s introduction, psychotherapist Gerald S. Drose explains that he wrote the book “as a view behind the curtain of psychotherapy” and recalls hearing a renowned psychotherapist opine that: “Techniques are what you use until the therapist shows up.” Bird Gotta Land, he notes, “is about a therapist learning to show up.”

That’s an apt description of this story, which revolves around Stephen, a divorced dad in his late 20s who left his three-year-old son, ex-wife and older lover in South Carolina to work on his psychology Ph.D. in Atlanta. His parents also divorced, after his father had an affair, and Stephen is somewhat estranged from his unwell father.

Throughout the novel, Stephen goes from someone who drinks, experiments with drugs and has short-term passionate relationships to being an involved father, falling in love with a fellow Ph.D. student, and getting reacquainted with his father. Ultimately, as Stephen works with his patients, goes through therapy himself and learns to speak his truths, he discovers his place in the world. Eventually, he learns that to truly connect with his patients, he needs to tell the truth to them much as a poet would.

The narrative unspools carefully, and readers learn that there’s more going on beneath characters’ surfaces than meets the eye. Sometimes, the dialogue sparkles, but many conversations grow clunky, especially when interspersed with Stephen’s interior thoughts, which are indicated by quotation marks. Use of italics in these situations would be much less confusing. Additionally, Drose sometimes tells instead of shows and over-explains psychological conditions (e.g., when the narrator explains the difference between anorexia and bulimia to his landlord).

The author, however, is adept at character development, and most readers will find themselves rooting for his flawed and utterly human protagonist by book’s end.

Despite the story’s flaws, readers going through psychotherapy and those simply interested in human development will find this a revealing glimpse into the making of a psychologist.